The War Day 11 (Friday) Weeping for the lost 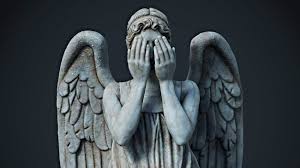 I was still not sleeping!  Every time I closed my eyes I could see Danny and her together, naked, kissing. I was awake throughout the night so I got up at five o’clock and did the ironing! I knew that I had to keep my mind occupied and I had read that doing things was a mechanism to allow you to feel as if you were in control. I needed to feel in control, because, in reality, I was still so out of control. I tried to look at the positive at least I was getting the fucking ironing done!!

My boss, May called me, as she had every day since The War’ had broken out; she was seriously concerned about me and wanted to make sure that I was alright. She suggested I go into work to see the girls, who were also all worried about me. The thought of going into work frightened me; all those pitying looks and hushed whispers, but I knew that these people really cared for me and I had to move forward so I agreed to go in to see them all.

Driving into work I had the music blaring out, ‘Hit ‘em up style’ by Blu Cantrell. I needed anything to try and fill my mind, and I cried all the way there. When I got to work and walked into the office the girls all came in and hugged me, and told me that they were there for me, that I was worth more than what had happened. All of them were shocked at the amount of weight I had lost and I knew that May is especially worried because I was nearly two stone thinner from when she had last seen me.

No-one can understand why Danny had done it, when it was clear that he loved me so much. I knew that they were trying to help me when they told me this, but it didn’t help, because I couldn’t understand it either; and if it were true I would just feel that all that love was wasted.

I decided that these people cared for me so much that I needed to go to back to work, and made the decision to  I go back on the following Monday.

When I got home I sat in the car for about five minutes gaining the courage to go into my own home, because as always I dreaded going into the now empty house. Ethan has gone to Essex with his friends and I was going to be. alone in that beautiful house, the one that we were so happy in, and now it was just a shell with all the memories echoing around me as I walked on the bare floorboards, the floorboards that I lovingly sanded and varnished. The house just felt so sad you could almost hear it sigh.

After about five minutes of going in ‘her’ partner knocked on the door because he wanted to tell me  that ‘She’ had contacted him and told him that ‘She’ and Danny were going to rent a house together in a town nearby, and that they had a tenancy agreement in place. I asked him why he was telling me;  couldn’t he see that this was exactly what ‘She’ wanted him to do? ‘She’ wanted him to tell me because that would increase the chances that I would never have Danny back. I told him that I didn’t want to know anymore and asked him to leave.

I had to get out, so I went down to a pub where I knew the landlady well. I didn’t care about the fact that I was going into a pub on my own; I saw it as a rite of passage, I was on my own and I needed to get used to it and get used to doing things on my own; and I saw going to the pub alone as a fear to face.

Because it was Friday night and early, the pub was full of blokes all celebrating finishing work for the week and getting ready to go out and get drunk. I knew that it looked as if I had been crying for a fortnight, because I had , but I didn’t care.  I also knew that my figure was starting to look really good, with all the manic exercise and the amount of weight I had lost, so I sat at the bar and bought myself a wine. Some of the men in the pub lived in our avenue, it was as if they all rallied round me because they knew what had happened. They stood with me, and bought me drinks, talked to me so that I didn’t feel alone.

After they left I finished my fourth large glass of red and I was totally pissed, because I had not eaten for nearly three weeks. I staggered back home, crying all the way; I didn’t care what the people who passed me thought, I just looked like a sad drunk woman to them, but I felt so lost that I just didn’t give a shit. Everyone was laughing at me now: the sad bitch whose husband went off with the woman who tried it on with so many others husbands, but mine was the one who left. What did that say about me?

Snowy our Westie was pleased to see ‘mummy’ as always. I put on my new CD’s and danced around the kitchen; I played Justin Timberlake, “What goes around” over and over again. Then Nelly Furtado’s album ‘Loose’, but I didn’t know all of the tracks on the CD and suddenly  I found it …“In God’s hands” and it hit me like a hammer.

As I listened to the words of that song I just sat on the kitchen floor sobbing, playing it again and again for over two hours, whilst the beautiful Snowy tried to kiss my tears away; but he couldn’t keep up with the volume and they plopped onto the floor until  the floorboards were soaking wet.

Our love floated out the window

By Nelly Furtado and Rick Nowles