It’s an old fashioned and funny word, Fester. But sadly it is an important word to consider with regard to our behaviour, especially where infidelity is concerned.

Reflecting on what happened to us I know that there were so many things that festered inside of me: How Danny had made a fool of me being the biggest one; how I had allowed it being the second biggest one. Pride (aka The Demon) really tried to wind me up (and succeeded on many occasions) with it’s stories running through my head. They would often fester for a couple of days and then all the built up poison would come out and I would take it out on Danny. Let us not forget how sixteen months in it all came out again

But as time wore on letting things fester became more dangerous, because as I got stronger it could easily have made our relationship deteroriate and die. When we got to over a year in, and then two years in, the constant living on adrenalin was taking its toll on Danny: he never knew from one day to the next if I would come home from work, or be there when he got home; it was a terrible place for him to be and it was making him ill.  But something intervened (as life often does) to make me think of the importance of not letting things fester. Here is that story:

Before I met my husband he was heavily into the Drum and Bugle Corps scene. It was never my thing even when I was younger; and as you will see from my book it was something that caused Danny to think he was not good enough for me: I was the cool independent type and he was the type that liked to do things in groups. But that is not the story:

In 2009 Danny’s old band re-formed for a reunion tour. Danny of course wanted to join it, but he had been engaged to someone from the band before he met me (in fact when he first met me he told me that she had been the love of his life, despite her not being the woman he had married in his first marriage.) So, of course, after ‘The War’ the fact that Danny wanted to join the band worried me. In fairness to Danny he asked me if I was in agreement, and said that he would understand if I said no. I have written about this in a journal entry in my book, but weirdly did not include the discussion I had with my sister about it.

I had told Louise that part of me did not want to stop Danny, because I had come to realise that I could not control his every move, and to be honest I didn’t want to. I did not want a life monitoring someone all the time; I had already come to the conclusion that if I felt like that, then it was something that I had to learn to control, because the only person that type of behaviour would damage was me: whether it was because I run the risk of being controlling, or whether it was because I would not be admitting to myself that I was unhappy where I was.

But… I was afraid (back to good old fear again) that Danny would cheat on me with the person who had been ‘the love of his life’. After all he had done it once already! So I told my sister that I did not want to stop Danny, but I did not want him to go either. Really I wanted Danny to be a mind-reader and just decide not to go because that is what he should do! Or that is what the demon told me: that if Danny really loved me he would not put me in the position of choosing what he should do. He should see it was the wrong thing to do and just stay at home without any owness on me.

As the weeks wore on and the likliehood of the band reforming grew I became more and more withdrawn, sarcastic, defensive and I distanced myself from Danny. Mr Fester had come in to play and all the things that The Demon had told me, were then left to brew under the surface because I did not want to lose face and tell Danny I cared enough to be afraid. I did not want him to know that I felt vulnerable.

Mr Fester drew on my silence, he loved it, because the more I went quiet the more Danny became afraid, and the more Danny tried to make things okay the more that added to the fact that I thought that Danny should know what I was thinking! It brewed and boiled below the surface, causing resentment and our communication and relationship to deteriorate. Poor Danny, he was doing all he had been doing and more as each day wore on and yet I became more and more withdrawn and isolated from him. (No wonder he got ill years later.)

My sister, as always, was both pragamatic and blunt! She asked me why I thought that Danny should ‘just know’ what I was thinking, and also why I thought it was a bad thing because he had asked me if it was okay to join the band. In addition she told me to tell Danny how I felt and why: that I felt vulnerable where his ex-fiancee was concerned, because of what had happened.

I was appalled I didn’t want him to know I was vulnerable. I couldn’t see that by not telling him, I was actually becoming more vulnerable by the day.

I told my sister that I didn’t want Danny to feel that he had any hold over me and she asked me (bluntly) why the bloody hell I thought he would, after he had worked so hard. And then she said this:

“Both of you need to understand that when something is on your mind you have to tell each other, no matter how painful it may be for the other person to hear; or how afraid you are of saying it. If you don’t, whatever is on your mind will fester, and over time it will turn from something that is probably so small, to something too big for you to manage. It will boil over and you will be at each other’s throats. For fucks sake! Isn’t that what happened before? Danny was afraid to tell you he thought you were too good for him; and you were too afraid to challenge him when you knew in your heart of hearts that something was going on with ‘her’. Learn your lessons: tell him what you feel.” Never one to mince her words my sister! And I love her for it.

So I did tell Danny. I waited until one Friday evening when we were relaxed and I could ensure that I was not accusatory or sarcastic, because I knew that this was the time to move our relationship forward and let some of our barriers down. To be the screaming banshee I could be was not going to help. I explained to Danny how I felt: that I was afraid of him going off with his ex-fiancee, of making a fool of me again; and of me allowing him to. I cried when I told him, and Danny cried too. He cried because he had made me feel this way because of what had happened; he cried that I still didn’t trust him (over two years later). His immediate response was to say he wouldn’t go; but as I have written in my journal I had to let him go, to prove to myself that I could trust him again. I reminded myself that the worst had already happened and I could cope if it went wrong again.

I also told Danny what my sister had said: of how we had let things fester before and that we should never do it again, and Danny could see that she was right (as always). We both knew that it was about facing our fears together, and over time this became one of the bedrocks on which our relationship is based. We never let things fester;  if we have something on our mind we talk about it; even if it means that we push the other to say what is the matter.

We have found that everything we thought was huge was in fact small and something that we could deal with, nothing can come between us because we talk about it. We never let it fester.

I have shared this story for all the people who read this blog (and hopefully the book) because festering can happen in so many ways: when people are being brow beaten and abused, when they don’t feel that they can say ‘do you know what I am not happy!’ When people are so afraid of what they will lose that ultimately they lose their freedom in life. Have courage, you got this.

If you want to read our story Making This Better the book is available as paperback or ebook. It includes the journal entries for the first 5 years of our recovery & the whole 21 days of ‘The War’. Available internationally in paperback and ebook  at Amazon and Barnes & Noble also available at Xlibris and Apple Books for iPad and Waterstones Bookstores for click & collect 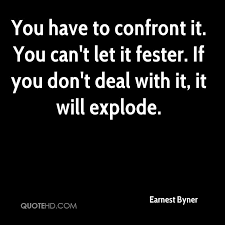