Two Journal entries because this is a big one – What is normal? 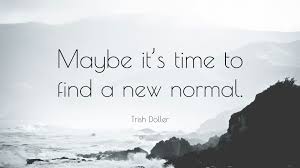 Something that conforms to a standard, type or regular pattern.

Something that we have come to expect.

Why won’t this sadness go away? Or am I asking too much?

It is still a bereavement, at times I feel am still in shock at what has happened. – Because I was so sure of our love and commitment for each other, that nothing would ever tear something so good apart; that it was the most rock solid thing that I was ever going to have, and it wasn’t!

All Rich says is that he does love me as much as I thought he did, because he came back. I suppose from that he means that he couldn’t keep away. I understand that part; but why did he do it? I still, at times, (not all the time, not like before), feel an immense sadness about it all; and it does drive a wedge between us, but I am so hoping that will get less.

Rich did try so hard yesterday. Cleaned inside my car with lovely smelling cleaners, cuddled and kissed me; but as he said last night, when we talked, it just never seems to be enough.

I understand as I am writing this what he means, and I don’t know if it will ever be enough.

As I have said before, I cannot throw away the love that I know we do have. But perhaps I continually ask him to be over the top with his affection because I know that will make me stay. And I am afraid of myself, afraid that eventually I won’t be able to. Perhaps I do still want that ‘special love’. Perhaps, if we can get through this, that is what Rich and I will achieve. But at the moment the wound is still so raw, I cannot see that happening. And perhaps it is ‘the test of time’ to see if we can / If I can stick it out.

I will try. Only time will tell.

I will give it time.

I cried at work yesterday, but I do think some of it was my hormones. Rich cried at home.

I think he was walking around the house, doing the housework, bawling his eyes out! What a pair! What does that say? I had rung him and told him I was upset.

When I got home he had done so much, mopped the floor, hoovered through, and cleaned our bedroom. He so wanted to show me what he had done. I know that this is a reflection of his love for me, I don’t doubt Rich’s love for me, especially now, and that it what I must focus on.

I gave him a big kiss, we kissed many times; I know we both feel the same. I played him an R Kelly song which has the lines

“and you had enough love for both of us,

but I did you wrong, I admit I did,

and now I’m facing the rest of my life alone.

It made him cry, made me cry; and I kissed him and said “We will make it darling, it just takes time.”

He grabbed me and said “We will won’t we?”

And we did make it!

But I feel so sad when I read some people’s struggle, as I can still relate today on how hard it is, you feel as if it will never go away; it will, but only if you let it.

I hope that I can show you when you read my madness and relate to it that you too  can survive it because we did. We are here today, living another adventure in which we have to trust each other  despite what happened to us.

So I put these two entries together to show you how my days were full of huge ups and even bigger downs. I think that one of the reasons that it was happening to me was because I wanted it to be over; wanted to ‘move on’, get back to ‘normality.’

The thing was, I was not accepting the fact that I did not actually know what normality was anymore. Everything that I thought was normal had in fact been blown apart by ‘The ‘War.’ The ‘Normal’ as I had once known it had gone and it wasn’t coming back.

It was only when I accepted this, when we accepted this  (because, importantly,  Rich needed to accept the fact that what we had he had broken; and that no matter what he did he would never be able to fix what we had; he could only work hard and build something new) only then did things start to get easier. But it is a passage of time that you have to go through and come out the other side, you have no choice; it takes time because first you have to realise that you have lost your ‘normal’ and then you have to grieve for it. But don’t grieve forever, to such a degree that you cannot see the new things that you are making, be careful that demon doesn’t suck you in on that front!

People have asked me how long it took to get over it; I don’t think that you ‘get over it’! I think you change and  you get stronger from it, but this will depend on whether you can accept where you are. To survive you have to accept that it happened and that your life changed because of it and then, and only then you can move forward.

I find that people think it just takes a couple of months, or up to a year, but you will see from our story it took over two years before it no longer consumed our lives; and I would honestly say, for me, about five years before I no longer thought about it every day.

I can remember the Counsellor saying to me that they set a six month timeframe: that ‘normally’ at six months you should be able to go through a day without thinking about it; and there is that word again! Normally!  I can remember panicking as October came our way: because there was no way that I was going to stop thinking about it every day at that point; when in actual fact that was my normal. I have a strong personality; I had a lot of pride to deal with so there was never any possibility that I was not going to be thinking about what had happened at the six month stage!

So yes ask other people how long it took them, but remember – what is their normal may not be yours, and don’t beat yourself up about it.

I would suggest that you try and keep something that will show you that things are getting better, a journal or a notebook; something that you can go back and read. The reason I suggest writing it  down is because your brain cannot then lie to you, as it is in black and white, there on paper: what you felt at that time; and take it from me don’t compare yourself to others and think that you are failing if you  haven’t met their timeframe.

After the five years it just got easier and easier for me and now I can talk about it, laugh about it (yes I laugh about some of it!) and cry about it sometimes, mainly with Rich because he still cries, and I cry for him!

So these two entries are to show you all that the same happened to me, this is how it works: you have a day when you are convinced that the future will be bright, followed by two days of despair. You just have to keep walking forward, small steps, as someone once said to me all those years ago.

When I read this entry it did bring tears to my eyes for Rich. I found myself feeling so sorry for him, he went through as much hell as I did, if not more, but it took me years to realise that!